The holiday season is approaching quickly. That means baked goods will be flying out of ovens as we prepare for family gatherings, office parties, and holiday dinners. Flour is one of the most common ingredients in these foods, but it doesn’t provide a huge amount of nutritional value. And if you’re cooking for someone with a dietary restriction (someone with a gluten allergy, for example), you’ll need an alternative.

Whole wheat flour is significantly higher in fiber than white flour because it contains all parts of the wheat berry, including the bran, germ, and endosperm. Whole wheat flour tends to add a nice nutty flavor, especially when used in breads and muffins. You can even combine whole wheat flour with all-purpose flour if you’d like.

Spelt is a nutritious ancient grain milled from spelt berries, a form of wheat. It’s a popular choice for whole-grain baking, and it’s even easier to digest than whole wheat flour because it contains less gluten. In taste and consistency, spelt flour is generally milder and lighter than normal flour, so it lends a subtle sweetness and smoothness to baked goods.

Rye flour is made from rye berries rather than wheat berries. Rye is a great source of fiber as well as other nutrients like phosphorus, copper, and manganese, and high-fiber foods are known to help aid in digestive regularity and even blood sugar control. Try rye flour when baking breads or muffins for an added earthy grain flavor.

Coconut flour does have a subtle smell and taste of coconut, but it’s mild enough in most recipes that it doesn’t make a big difference in terms of flavor. It’s high-fiber and low-calorie, and it contains good fats. Note that when using coconut flour, the ratios won’t be the exact same as if you were using regular flour—you’ll only need to use about 20 percent of the amount of coconut flour as you would white flour because coconut soaks up a lot of moisture when it bakes.

Brown rice flour is naturally gluten-free—perfect for those on gluten-free diets—and it’s nutritious, too. As with most of the alternative flours on this list, it can be combined with other flours when you’re baking, or it can be used entirely on its own. It’s also good for thickening up gravies and sauces.

When you’re preparing your holiday meal this year, try one of the alternative flours above if you’re looking for a healthier option than white flour. You’ll be surprised how delicious and easy to use these options are! 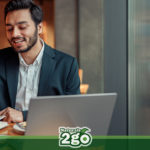